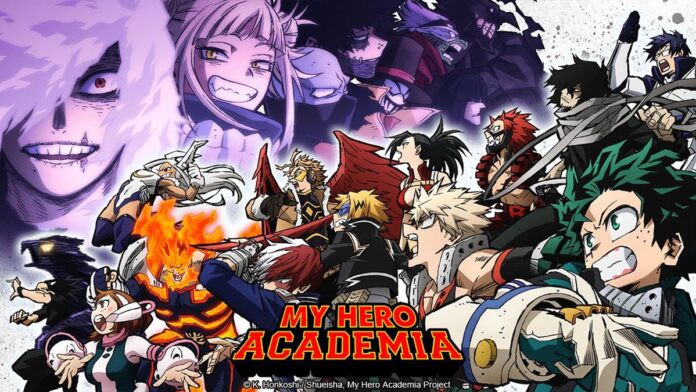 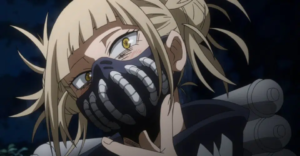 The lone female member of the League of Villains is Himiko Toga. She and Dabi were both introduced. She wanted to join Tomura so that she might become like Stain and be able to kill Stain because Stain had influenced her. She is a sexiest character of My Hero Academia. Toga is an outright psychopath who has killed multiple people. She may transform into the person whose blood she has taken thanks to her quirk. Deku, at least the battered Deku, also seems to intrigue her. 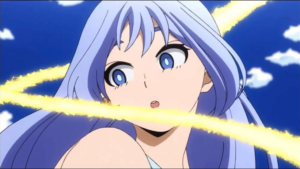 The bis 3 are a group of students at U.A. High School that are regarded as the best in their class. One of them is Nejire Hado. She is qualified to take on missions that actual heroes would find difficult because she is one of the Big 3. She serves as a role model for a lot of students. Wave Motion, one of her quirks, enables her to transform her strength and energy into blast waves that she can utilise to soar or engage foes at a distance. 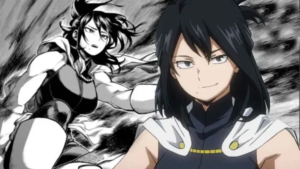 Before All Might inherited it from her, the first owner of One For All. Gran Torino’s close buddy Nana Shimura taught All Might before he turned into the Symbol of Peace. The philosophy of remaining positive in the face of peril was transmitted by Nana, and it was notably handed on to Deku. The characters in the story, as well as us, the viewers, were greatly impacted by her actions toward her grandson Tomura and against All For One. 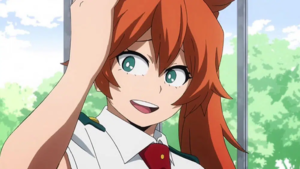 Itsuka Kendo, a student in Class 1-B at the U.A. High School, is a very compassionate individual. Many of her peers consider her to be their older sister and look up to her. Itsuka is also prepared to renounce a significant honour or a job if she believes that a rival is more deserving of receiving it. She is a sexiest character of My Hero Academia. Itsuka has a strong sense of duty and is the one to remind any of her students to stay within their limits if they cross the line into class 1-A competition. Her ability gives her exceptional physical strength because it enables her to make their fists bigger. 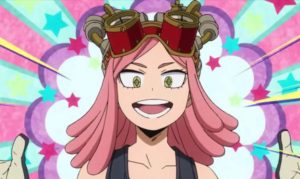 Not everyone has the good fortune to be born with quirks that are advantageous in combat. One of them is Mei Hatsume. That didn’t, however, deter her from having heroic aspirations. She has a quirk called Zoom that enables her to see in great detail, but her true abilities are found inside the Department of Support. Mei has the ability to make tools that aid other students and other heroes in fights or rescues. She has frequently aided Deku while also making Uraraka envious. 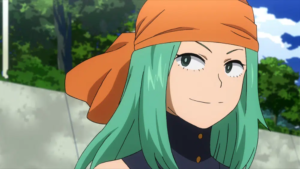 It’s fascinating to learn about the professors in my hero’s academic world. They are superb fighters, have years of experience as heroes, and are devoted to their charges. Emi Fukakado, on the other hand, is a teacher at Ketsubutsu, a High School affiliated with a different academy. Ms. Joke is another name for her. We can infer that her Quirk has the power to make people chuckle. She frequently asks Shota Aizawa, the teacher of class 1-A, to marry her as a “joke,” which suggests that she may be interested in him. 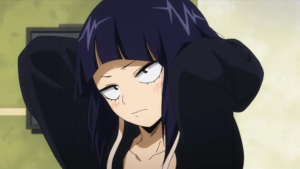 Jiro, a student in class 1-A, is a bit more reserved than more outgoing classmates Mina and Uraraka. She is quite gifted at singing and playing the guitar or bass, but she keeps her interests a secret. Earphone Jack, one of her quirks, operates utilising the audio cords that come from her ears. Jiro has the ability to hear sounds coming from a distance and gauge how many adversaries are around. She can also launch a loud noise wave as an attack using her sound wires. 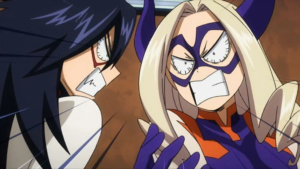 Yu, also known as Mount Lady, is a professional hero who initially appears in the pilot. She tried to shine in public by presenting herself as attractive and appealing because she believed that young people should be given more opportunities to shine and become famous. Because of her Quirk, she can get bigger and bigger, which increases Yu’s attraction because she looks “massive.” She is a sexiest character of My Hero Academia. Even though fame and wealth may be more important to her than actual heroism, she nevertheless puts her life in danger by fighting off numerous adversaries in order to save and shield others from harm.

Mina Ashido is a first-grade student. She is an extremely outgoing girl with plenty of energy to accomplish many fascinating things. Mina values her pals dearly and values their company more than schoolwork. When she is given any form of punishment that prevents her from hanging out with others, she can act very upset. Her special ability, called Acid, enables her to produce acid from her own body. She can use acid to attack by melting targets or to boost her mobility by sliding on her feet.

Also Read: Most 30 Attractive and Cute Boy Anime that you will love most 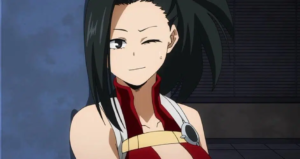 Momo, one of the contenders to represent class 1A, is a bright young lady who was admitted to the U.A. High School on the basis of a recommendation. She was secretive about her family’s wealth until she encouraged her classmates to join her in studies. Momo struggled with confidence, but she was able to overcome it and develop into a skilled combat planner. She can construct an object from her body thanks to her quirk, Creation. Although it is a very strong quirk, it is also incredibly challenging to perfect. 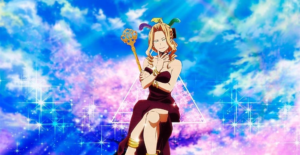 A stunning and alluring person who is both a star and a sports hero. Uwabami flexes her all over and draws a lot of admirers who want to capture her allure in photos. Momo and Itsuka spent much of their time at Umabami’s job just being attractive rather than picking up any important information or practising for battles, which says volumes about Umabami’s priorities and standards. 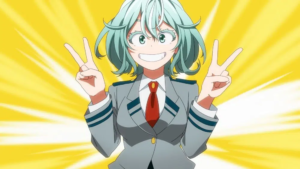 Another student from class 1-A at U.A. High School, but this one is shrouded in mystery. The Invisible Girl is Toru. As the name implies, Toru possesses an Invisibility Quirk that enables her to remain invisible at all times. Nobody ever saw her face, thus no one knew what she looked like. She is a sexiest character of My Hero Academia. But it’s possible to visualise her body type just looking at the items she wears. Invisible Girl might be the beautiful woman on the show simply because everybody can imagine what she might look like if they applied their criteria to her appearance.

Uraraka is a really kind and sweet young lady. When Deku was initially presented, she prevented him from falling and saving him from disgrace when he nearly tripped in front of the school. She is a kind girl who genuinely cares about her friends and family. Her motivation for taking on heroic roles is to earn money to support her parents. Even though Uraraka is an entirely good person, you shouldn’t underestimate her because of her peculiar zero gravity ability, which causes anything she touches to lose weight and gravity and lose their identity. She has also received training for close quarters combat. 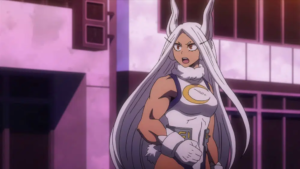 She is ranked No. 5 in strength, talents, and experience among the top 10 Pro Heroes in Japan. Given that Rumi has long bunny ears, the moniker “rabbit” for her quirk seems a bit clear. Rumi has a tremendously muscular figure, especially in her legs, which is likely due to her Quirk. Given her status, her fighting skills and choices must be of the highest calibre. Rumi is forthright and doesn’t hesitate to express her opinions in any situation.

Nemuri Kayama, a teacher at the U.A. High School, is yet another educator on this list. She attends significant gatherings where the principal and other well-known people are present. Midnight is the name of her hero. It was evident during the U.A. competition when the kids voiced their great feeling of heroism that she was moved by their remarks. She is a sexiest character of My Hero Academia. She has an odd thing for youth and their tenacity. Nevertheless, she is regarded as a Pro Hero, and her Quirk releases a violet mist that, if absorbed sufficiently, can put anyone to sleep. 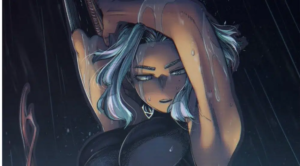 Lady Nagant was a Pro Hero before she turned into a villain and the major antagonist. She possesses a Quirk called a Rifle that enables her to use one of her arms as a sniper rifle and fire a lethal shot using her sniping skill. Her real name is Kaina Tsutsumi, and in addition to having the Air Walk Quirk that All For One has, she has been using it to give herself far more mobility. By combining it with her skill at sniping, she can turn into a deadly adversary. 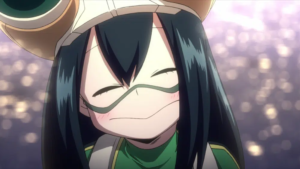 Tsuyu Asui, a student from class 1-A at the U.A. High School, prefers to be addressed as “Tsu” by her close pals. She is a favourite of the Boku no Hero Academia fanbase because of her intriguing personality and quirk. She has various superhuman talents because to her Frog Quirk, including the ability to stick into a wall and lengthen her tongue. Tsu also mimics frogs by uttering “ribbit ribbit” when she speaks, but that comes as no surprise given her Frog Quirk. 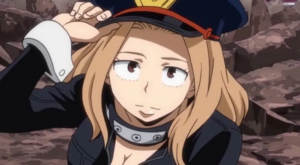 A Shiketsu High School second-year student aspires to be a Pro Hero. She was a phoney, created by Toga from the League of Villains, during the licensure exam. But when he came back, she made it clear what kind of mentality and attitude she had. She is a carefree individual who possesses a Quirk that enables her to produce illusions, similar to magic tricks. Glamour is her Quirk nick name. 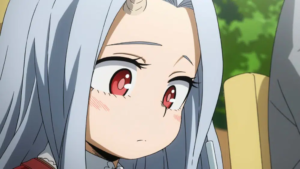 Eri is a little child who possesses the scary Quirk Rewind. She has the ability to turn back time to anything, even before the beginning of time. She accidentally killed her father by doing this to him. Eri is a terrified young woman who was abducted by a number of groups that intended to utilise her blood in scientific experiments. She is a sexiest character of My Hero Academia. Fortunately, Deku saved Eri, and teacher Aizawa managed to control the Pro Heroes and her Quirk. Eri is a meek, reserved girl who gradually gains confidence. 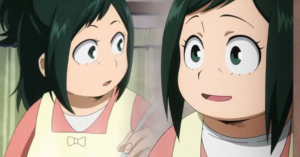 She is the mother of Deku, the story’s major character. Midoryia’s quirklessness has been known since episode one, shattering his hopes of becoming a hero. Since Inko couldn’t accept that Quirkless might rise to become a hero, she appeared to be at a loss for what to do. She did everything a mother would before Deku entered the U.A. High School to become a hero, but she afterwards regretted not helping her son.